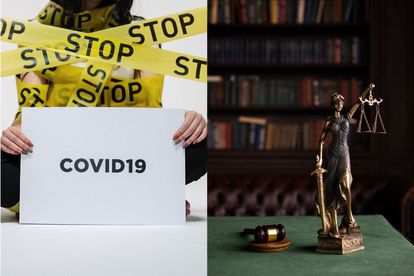 The health minister is in court over the new drafted regulations on Covid-19. A three month period must be given but the public were given 30 days. Photos: Pexels/Cottonbro and Ekaterina Bolovstova

The health minister is in court over the new drafted regulations on Covid-19. A three month period must be given but the public were given 30 days. Photos: Pexels/Cottonbro and Ekaterina Bolovstova

The Western Cape High Court will hand down its ruling by Tuesday in a challenge to the controversial new draft health regulations proposed by the government that provide health officials with wide-ranging powers to control Covid-19 positive patients.

On 14 April the lawyers for civil group Action 4 Freedom, Naven Pillay and advocate Sabelo Sibanda obtained an order preventing Health Minister Joe Phaahla from acting on the regulations until 3 May.

The case appeared before Judge Hayley Slingers on Tuesday, where a number of other civil society groups attempted to join the proceedings but had their applications denied.

The African Christian Democratic Party’s lawyer, Reginal Willis, was allowed to make submissions to the court.

In it were far-reaching regulations that many critics have considered a “copy and paste” job of the National State of Disaster that was in full force during South Africa’s arduous lockdown.

Action 4 Freedom subsequently wrote and sent a letter to the health minister on 29 March raising their concern about the 30 day period offered for public consultation regarding the National Health Act Regulations Amendments contemplated.

The National Health Act states in Section 90(4)(a):

“The Minister must publish all regulations proposed to be made under this Act in the Gazette for comment at least three months before the date contemplated for their commencement.”

In one of the Notices published under Gazette Number 46048, the health minister referenced section 90(4)(c) but still only offered 30 days of consultation.

Judge Slingers reserved judgement and said that judgement will be handed down electronically to the parties over the course of the next few days, but not later than 3 May.

HOW ARE YOU AFFECTED BY THE REGULATIONS?

If the draft regulations become law it will provide a way for health authorities to regulate any outbreaks of coronavirus infections. However, Covid-19 was not mentioned by name in the regulations.

They refer to pathogens causing respiratory disease as one of the conditions that will trigger these regulations.