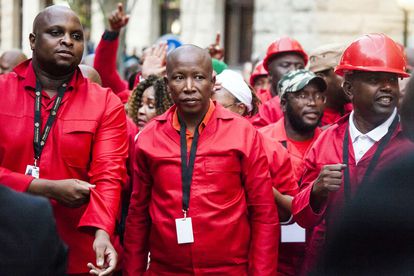 Malema, however, will not put in an appearance himself, according to EFF KwaZulu-Natal provincial chairman and MPL Vusi Khoza.

“The commander-in-chief will not be appearing in person; only the lawyers will be appearing,” Khoza told African News Agency (ANA) on Sunday.

Malema and the Riotous Assemblies Act

He said it was anticipated that the matter would be a “straightforward postponement”, as Malema’s legal team was still in the process of challenging the constitutionality of the Riotous Assemblies Act.

Malema was charged with contravening the Act for utterances he made in Bloemfontein in 2014 and in Newcastle in 2016. He was also charged for contravention of the Trespass Act.

On June 26, 2016, during an EFF rally in Newcastle, Malema told his supporters to occupy land because it belonged to blacks; whites could not claim ownership of South African land, he said. He made similar remarks in Bloemfontein two years earlier.

After appearing in the Newcastle Magistrate’s Court in November 2016, Malema stepped outside the court and again told his supporters to “occupy the land, because they have failed to give you the land”.

Heading to the Constitutional Court

Malema and his lawyers have argued that the Riotous Assemblies Act is “a piece of apartheid legislation” that should be scrapped, as it was being used to silence freedom of speech – particularly of politicians, as was done under apartheid.

Malema was at the Pretoria High Court last week, where he had challenged the Act. While the court did not find the entire Act unconstitutional, it found unconstitutional a section stating that inciting violence was the same as committing violence, and that a person could be charged and sentenced as if it were the same thing.

The EFF will now approach the Constitutional Court in an effort to have the entire Act declared unconstitutional, Malema has said.

He still faces charges under the Trespass Act, which the High Court last week said should be heard in the lower courts. He is set to appear again for the Bloemfontein case in November.