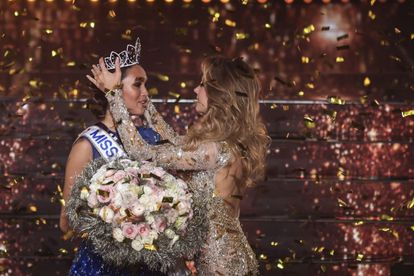 Miss Ile-de-France Diane Leyre is crowned by Miss France 2021 Amandine Petit at the end of the the Miss France 2022 beauty contest in Caen, on 11 December 2021. Photo: Sameer Al-DOUMY / AFP

Miss Ile-de-France Diane Leyre is crowned by Miss France 2021 Amandine Petit at the end of the the Miss France 2022 beauty contest in Caen, on 11 December 2021. Photo: Sameer Al-DOUMY / AFP

The newly crowned Miss France 2022 insisted that she was a feminist after winning this year’s competition which has drawn criticism from the government’s gender equality minister.

“As a woman, I wanted to show that you can be Miss France and a feminist,” Diane Leyre, a 24-year-old real estate professional from the Paris region, told a press conference on Saturday night.

“For me, being a feminist is deciding what I want.”

The Miss France competition and other beauty pageants around the world have long been criticised by women’s rights groups as objectifying women and promoting unhealthy body images.

Opposition was led this year by France’s Gender Equality Minister, Elisabeth Moreno, who denounced the competition’s “outdated rules… which can be discriminatory”.

MISS FRANCE GETS WITH THE TIMES

Contestants have to be single, more than 1m 70 cm (five foot six inches) tall and be less than 25 years old, although organisers announced Saturday that the requirement to be unmarried will change “to bring us into step with the era”.

Possibly including transgender participants “is part of our discussions,” the head of the Miss France company, Alexia Laroche-Joubert, told Europe 1 radio on Saturday.

More than seven million people – around one in seven French adults – tuned in to watch this year’s competition on the TF1 channel on Saturday night which was filmed in a stadium in the northeast of the capital.

“We all need a bit of lightheartedness,” Culture Minister Roselyne Bachelot told the BFM channel on Friday, defending the contestants whom she described as “far from being empty trophies.”