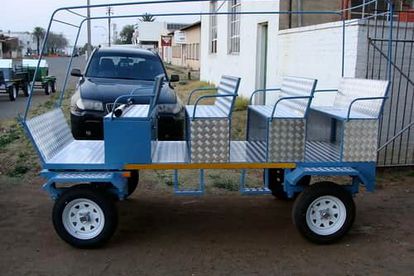 A donkey-drawn cart with seat belts and sound system among other features. Photo: Djo BaNkuna/Facebook

A donkey-drawn cart with seat belts and sound system among other features. Photo: Djo BaNkuna/Facebook

There is a new bidder in town manufacturing donkey-drawn carts comprising safety features such as seat belts.

Djo BaNkuna has taken his business to Facebook to showcase the quality of his donkey-drawn carts.

This follows the widely criticised procurement of 20 substandard donkey-drawn carts by the North West Department of Community Safety and Transport Management for R780 000.

NO MALICIOUS INTENTIONS BY MANUFACTURER

The new bidder was not necessarily advertising his company to score cheap points against the service provider in the North West but did so to get public approval before he places his bid at a municipality in a different province.

“My Donkey Cart Hustle! I heard that MEC Florence Radzilani is busy preparing to launch a donkey cart project in Giyani, Tshakhuma and Namakgale. I am ready for the tender,” he said.

“My factory in Nkowankowa is running full steam. We are producing 2, 4, 6 and 8 sitter donkey carts.”

WHAT DIFFERENTIATES HIS PRODUCT FROM THE REST

Apart from the seat belt safety feature, BaNkuna alluded that his carts also come with comfortable seats and music.

“We are busy installing soft seats, lights and sound systems,” he said.

“I have already ordered seatbelts from Alibaba. Our carts are ISO 2024 certified,” he added.

“My farm in Gravelotte is well stocked with the freshest SPCA-compliant donkeys in Mzansi, as you may see.”

BaNkuna manufactures these ‘top-class’ carts because he believes, “Our people deserve the best!”

Meanwhile, The Special Investigative Unit (SIU) is reported to be looking into the widely criticised donkey-drawn carts purchased for R780 000 by the North West Department of Community Safety and Transport Management.

The SABC News reported that the controversial donation of the 20 carts to the residents of Dibono and Manawana villages in Mahikeng has prompted a special investigation by the SIU.