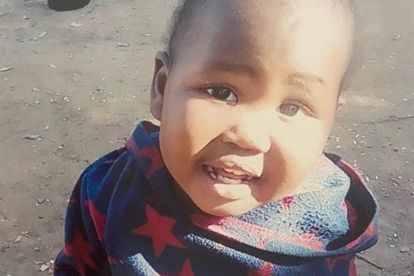 The lifeless body of two-year-old Neo Refemetswe Tlhame from Extension 3, Blydeville outside Lichtenburg has been found in a shallow grave on Tuesday, 5 July 2022.

The two-year-old was last seen on 24 May 2022 and was reported missing a few days later. He was wearing a blue top with red stars, blue pants and blue shoes – the same clothes he was wearing on the photograph that was circulated by the police during his search.

Police were reportedly called by Neo’s mother after they spotted a suspicious grave near the river.

The grave was dug out and the decomposed body of young Neo was identified with the clothes that he was wearing on the day of his disappearance.

North West Police spokesperson, Lieutenant Colonel Amanda Funani said the two-year-old, who was with his grandparents, went missing on Tuesday, 24 May 2022, but his disappearance was established by his mother when she went to fetch him after work.

“Subsequent to the fruitless search by the community members and Neo’s family, a missing person inquiry was opened for investigation.  The police also joined the search but Neo was never found. The cause of death is still unknown and no one has been arrested.”

North West Police Commissioner, Lieutenant General Sello Kwena condemned the incident and urged the Lichtenburg Detectives to do everything in their power to arrest the alleged perpetrators of this crime.