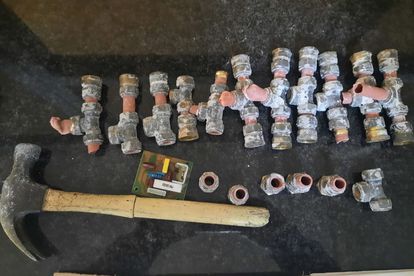 A suspect was caught with 32 brass fittings stolen from communal taps. Photo: SAPS.

A suspect was caught with 32 brass fittings stolen from communal taps. Photo: SAPS.

A 35-year-old man was arrested in the Eastern Cape for theft on Thursday night, 14 July, after he was caught while removing copper brass fittings from taps.

Members followed the sounds to a nearby communal site where the Nelson Mandela Bay Municipality installed taps to help the community during the current water disaster.

“The suspect was caught in the act removing the copper brass fittings from the taps.  A total of 32 brass fittings was found in his possession,” said the police spokesperson.

The alleged brass bandit was arrested and charged with theft. He is expected to appear before the Gelvandale Magistrate’s Court imminently.