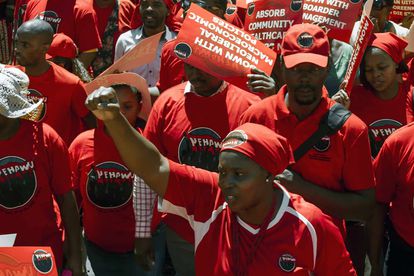 The Labour Court has put a spanner in the works for the National Education, Health and Allied Workers’ Union’s (Nehawu) plans to bring the healthcare sector to its knees, ruling that its strike action at the National Health Laboratory Service (NHLS) is illegal and cannot go ahead.

“The Labour Court has today ruled that the strike action planned by the National Education Health and Allied Workers Union (NEHAWU) at the National Health Laboratory Service (NHLS) is unlawful, not in compliance, and breach of the relevant provisions of the Labour Relations Act”, said the NHLS’s Mzi Gcukumana.

Gcukumana said if the strike continued, South Africans will not know the number of COVID-19 infections in the country which could negatively affect the government’s efforts to contain the spread of the pandemic.

“The NHLS, through its NICD division, will be unable to compile a guideline document to support surveillance, case finding, diagnosis, management and public health response to cases under investigation. In addition, many South Africans may not be able to get tested for COVID-19, which will have an impact on the epidemic”

Being a state-run laboratory, the NHLS plays a key role in the country’s fight against the coronavirus, with one of its core functions being to oversee and process tests of the respiratory disease.

However the ruling was not enough to faze members as they gathered in their numbers at the NHLS offices in Johannesburg on Tuesday, 25 August 2020, defying the order.

Speaking to ENCA, Nehawu Sandringham branch secretary Judah Mphati said the NHLS needed to be reminded that it is workers who run the show.

“We want to demonstrate to the employer that they are where they are because of us. And without us, they don’t exist”, Mphati said.

“Our people who are very poor are black people. Majority of black people are depending on the services that we are rendering, so it’s unfortunate”

The union has expressed concern over the high number of frontline health workers that being infected by COVID-19 while on duty and has vowed to not back down until government adheres to their demands.

Nehawu, which represents at least 235 000 members within the public sector, is one of the biggest unions in the country and is demanding better wages and provision of adequate personal protective equipment (PPE).