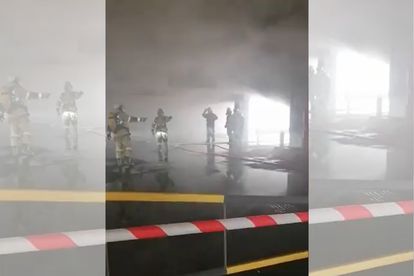 When the Charlotte Maxeke Hospital was gutted by fire in April 2021. Image via Twitter/@GPDID

When the Charlotte Maxeke Hospital was gutted by fire in April 2021. Image via Twitter/@GPDID

Public service union, National Education, Health and Allied Workers Union (NEHAWU) has demanded an investigation into the fire that broke out at Charlotte Maxeke Hospital in Johannesburg. The union wants the investigation to reveal what type of safety measures the hospital has and lacks.

The Charlotte Maxeke Hospital caught alight on Friday, and the fire affected the hospitals dispensary and other buildings.

“This is a setback considering that workers are already in dire need of personal protective equipment (PPE) and other medical supplies. As we head towards the third wave of COVID-19 infections, hospitals must be fully stocked with PPE so as to avoid the mass infections of front line workers like it happened during the first wave,” Nehawu said.

INVESTIGATION MUST REVEAL FIRE FIGHTING MEASURES THE HOSPITAL HAS AND LACKS

“Investigations must reveal if the hospital has a functional fire sprinkler system and other measures to deal with such an ordeal. Nehawu has been at the forefront of highlighting the unsafe state of government buildings, especially the Civitas Building and the Bank of Lisbon Building, among others,” the union said.

The union also called on the Department of Health to ensure the safety of the workers and adherence to the Occupational Health and Safety Act. “The Department of Employment and Labour must constantly deploy inspectors to enforce compliance.”

The health facility which is one of the biggest in Gauteng was temporarily closed on Saturday morning. A fire which started on Friday reignited and patients had to be evacuated.

Gauteng Premier David Makhura commended all the men and women who worked around the clock to ensure that no patient casualties from the fire and the evacuation operation.

“This is one of the biggest hospitals in our province, and central in the fight against COVID-19. At around 11:20 on Friday, there were five officials and two security members who caught the fire.

It has been recommended that we must temporarily shut down Charlotte Maxeke hospital for the next seven days. The transfer of more than 400 patients has already started,” Makhura said.