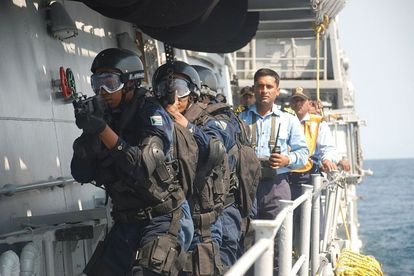 The Navy’s maritime reaction squadron has been deployed to its antennae facility to guard communications from theft and vandalism. Photo: Ministry of Defence, Government of India / Wikimedia

The Navy’s maritime reaction squadron has been deployed to its antennae facility to guard communications from theft and vandalism. Photo: Ministry of Defence, Government of India / Wikimedia

The South African navy had to deploy members of its reaction squadron to guard critical radio communication at its antennae farm facility. The members were deployed to the mountains situated above Muizenberg.

Cable thieves are a threat to the facility

Reports state that the antennae were under threat from cable thieves. The military has, so far, spent around R10.5 million replacing the fence around its antenna farm. The farm overlooks the Silvermine maritime communication facility in Cape Town.

The fence is required imperative for the safety of the equipment. It’s the navy’s attempt at preventing theft and vandalism. TimesLIVE reported that the equipment that has been stolen or vandalised has already cost the navy over R850,000.

A new fence at the antenna farm would cost around R13 million.

In Parliamentary replies to questions about the facility, details about the repair work emerged. Minister of Defence Thandi Modise stated that there are currently no plans to decommission the facility. This is despite the infrastructure issues.

The facility plays an important role

Modise explained that the facility is important. Adding that it plays a vital role in numerous levels of national security. Including, but not limited to, air traffic and maritime communications in SA.

Modise stated that if the equipment fails at the naval communications centre, all communication services will be handled in Durban.

South Africa has reportedly spent a jaw-dropping R359 million on training military members in Cuba since 2014.

Modise defended the Spanish lessons by stating that only courses such as medical and pilot courses were taught in Spanish. Therefore, it required members to spend a full year learning the language. Read the full story here.