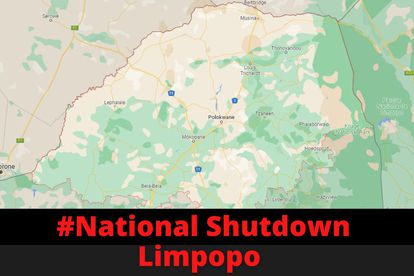 National Shutdown: Which roads, sites, and regions will be affected in Limpopo Photos: GoogleMap/Stock/Canva

National Shutdown: Which roads, sites, and regions will be affected in Limpopo Photos: GoogleMap/Stock/Canva

With the looming threats of a National Shutdown planned for Wednesday, we take a look at which roads, sites, and regions in Limpopo will be affected.

Cosatu made a clarion call to all South Africans to down tools on Wednesday and push back against the government and the private sector’s inaction in tackling socio-economic challenges.

It said the only way to make the government act against the unaffordable cost of living is to bring the economy to a halt.

WHERE ARE THE MEETING POINTS IN LIMPOPO?

The participants will assemble at the SABC Park – on R101, Polokwane Ext 46, Polokwane, at 09:00 on Wednesday.

“COSATU Limpopo declares its readiness to embark on a national shutdown against the socio-economic crisis in our country.”

The federation has called for a national strike following socio-economic challenges:

ALSO READ: National Shutdown: Which roads, sites, and regions will be affected in Western Cape

ALSO READ: National Shutdown: Which roads, sites, and regions will be affected in Gauteng

Meanwhile, the South African Federation of Trade Unions (SAFTU), said the wave of strikes due to hit Mzansi on Wednesday might well extend beyond a ‘one-day event’.

General Secretary of SAFTU, Zweli Vavi, told a press conference on Monday that the planned scale of strike action would be sustained ‘for some time’ going forward. He sees this moment as an opportunity for the working class to ‘redress the balance in South Africa.

Whereas SAFTU is seeking social justice, millions of commuters face an almighty upheaval on 24 August. This National Shutdown has been in the pipeline for a while – and it will be backed by the political might of both the EFF, and the ANC’s tri-partite partner Cosatu.