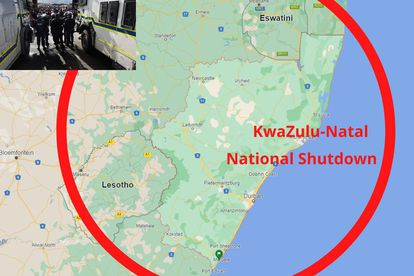 National Shutdown: Which roads, sites, and regions will be affected in KZN on Friday. Photo: GoogleMap/Supplied/Canva

National Shutdown: Which roads, sites, and regions will be affected in KZN on Friday. Photo: GoogleMap/Supplied/Canva

With the looming threats of a National Shutdown on Friday, we take a look at which roads, sites, and regions in KwaZulu-Natal might be affected.

Meanwhile, EThekwini Mayor Cllr Mxolisi Kaunda has warned that any protest action must be lawful and peaceful. He added that those who may want to take advantage of the situation and break the law would face its full might.

Kaunda has since put all Metro Police officers on standby to respond to any unlawful conduct that could destabilise the economy of the city and infringe on the rights of residents that are not part of the shutdown.

He has also confirmed that the municipality remains open for its normal operations tomorrow.

“The city is still reeling from the effects of the recent floods. While we are all concerned about the price of petrol, disrupting businesses and shutting down the country is counterproductive. It will reverse all the gains that we have made following disruptions related to Covid, the July unrest and the recent floods. The law will take its course in the event of anyone disregarding it.”