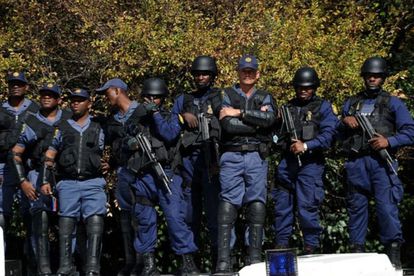 A huge police presence is expected to be deployed on 24 August – Photo: World Armies / Flickr

A huge police presence is expected to be deployed on 24 August – Photo: World Armies / Flickr

Last week the Economic Freedom Fighters (EFF) confirmed its backing of the idea of a National Shutdown on Friday, 10 June. However, it seems talks around this nationwide protest have slowed.

SANTACO denies involvement in the planning of the national shutdown

While SANTACO solidified their stance on the planning of the shutdown, it did still state that urgent Government intervention was needed regarding the record-high fuel prices plaguing the country.

Taxi fares are set to increase with passengers dreading the worst

Taxi fares are set to increase in the coming weeks with the recent increase in fuel prices and social media has been rife with talks of a national shutdown. Last week, petrol increased by R2.43 per litre. Diesel went up by more than R1 a litre.

Graham Fritz of SANTACO said the Government needs to look at bringing down the fuel price. Fritz says that passengers are going to be feeling the pinch.

“Government can maybe have a look at bringing down the fuel price, which is uneconomical for us as a country. The passengers, in the long run, are going to bite the bullet here and we really wouldn’t want to do that by just increasing our fares,”

Government is set to continue with talks regarding the high fuel prices in SA, reports EWN.

Social media users are questioning whether or not there will be a national shutdown or if it was just ‘another hashtag’.

Previously, it was reported that in a statement, the ferocious Red Berets lashed out at the petrol price increase. Despite the government’s extension of the fuel levy, the far-left party have not been placated, and will instead take to the streets alongside other National Shutdown organisers.

“The EFF is convening a meeting to discuss how we respond to these rising prices. We will also consider engaging in a National Shutdown, until the cost of petrol is reduced. It is up to the Treasury to introduce measures which will immediately lower our fuel prices.”

Meanwhile, a former senior AfriForum official has found himself on the same side as the EFF. Ian Cameron, who now serves as a Community Safety Leader for Action Society, has mused that a National Shutdown could be ‘what is needed’ in South Africa. Read the full story here.