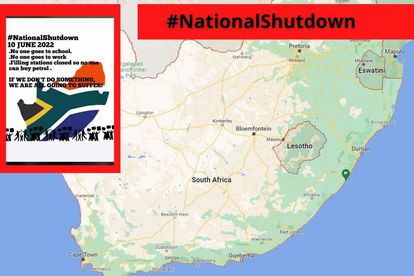 With the looming threats of a National Shutdown on Friday, we take a look at which roads, sites, and regions in South Africa have been identified as vulnerable regions.

“We have had no direct confirmation that a national shutdown will happen. Our teams are on standby with contingency plans to manage any unrest that may happen”.

Fidelity will place helicopter pilots on standby and be ready to deploy its resources, which include manpower and armoured personnel carriers.

‘HELICOPTER PILOTS WILL BE ON STANDBY AND READY’

“We have the capacity to allocate additional staff to the JOC compliment to assist with risk analysis as well as to assist with recovery efforts through air and ground support, in conjunction with the SAPS. We have identified hotspot areas that will be monitored by our teams.”

“The company is continuously liaising with their intelligence resource networks gathering concrete information related to the possible national shutdown and will report immediately if any information is received.”

HERE ARE THE REGIONS, SITES AND ROADS:

Meanwhile, Meanwhile, the National Joint Operational and Intelligence Structure (NATJOINTS) confirmed it is aware of a potential National Shutdown on Friday, 10 June.