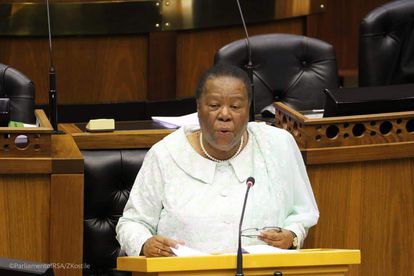 The International Relations Minister has been forced to deal with a diplomatic crisis this week, after the second bout of xenophobic attacks in South Africa flared-up over the weekend. Naledi Pandor met with several of her African colleagues on Monday, to explain why foreign nationals are being targeted in Mzansi.

During the summit, Pandor explained that a “toxic mix of socio-economic factors” had lead South Africa down this dark path. More than ten people have been killed in the violence, which has targeted foreign-owned businesses and migrant communities. The situation still remains incredibly tense.

Certain protests have been heard chanting for foreigners to “go back home”, and millions of rands worth of damage has been caused on the streets of Johannesburg during the unrest. A mosque was attacked with a petrol bomb on Sunday, and a handful of foreign-owned stores in Cape Town have also been targeted.

Naledi Pandor was determined to offer an explanation which vouched for such criminal acts. She suggested that South Africa’s “progressive laws” on migration had been abused. However, the minister also indicated that apartheid has a crucial part to play in understanding these disruptions:

“The legacy of apartheid was deep and rigidly entrenched inequality for black people. While political and civil freedom soothed the wounds of apartheid, the long term and worsening economic inequality has deepened resentment and caused antipathy toward brothers and sisters from other African countries.”

“Perceptions that black migrants take up black jobs and displace black workers have caused increased deterioration in the relationship. South Africa adopted progressive laws on migration and created room for expanded access to the country, with little regard to the needs of immigration management and lack of a plan as to skills or industrial development needs.”

However, the story offered-up by Naledi Pandor has caused a few waves on social media. A number of people are struggling to accept her version of events, and feel like blaming xenophobic attacks on apartheid is a cop-out when so many other societal issues are at play here:

@NalediPandor Blaming apartheid for the recent xenophobic violence is a lame excuse for the corruption & mismanagement by the ANC & it’s failure to properly educate learners – with 7.5 million learners dropping out of school before completing matric. This is the ANC’s legacy.