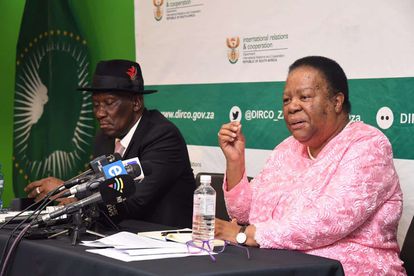 The Department of International Relations and Cooperation (Dirco) has stated that it is concerned about statements made by a student organisation in Nigeria regarding an alleged plot to expel South Africans from the country.

According to Dirco Minister, Naledi Pandor, it is highly unfortunate that such threats are allowed to fester in society without recourse from the Nigerian government.

The minister raised this at a media briefing on the upcoming SADC Summit.

“I wish to take this opportunity to express my — and my department’s — concern regarding statements said to emanate from a student organisation in Nigeria, calling for the expulsion of South Africans and protests at South African-owned businesses.

“The protests are said to be in response to alleged killings of Nigerians by South Africans. As you are aware, these allegations are devoid of truth, they are reckless and unwarranted,” Pandor said.

Protests linked to the death of Ndubuisi-Chukwu

She further revealed that the anti-South Africa rhetoric that is being propagated by the Nigerian student organisation is linked to the mysterious death of Elizabeth Ndubuisi-Chukwu, the Deputy Director-General of the Chartered Insurance Institute of Nigeria.

Ndubuisi-Chukwu was found dead in her room, at the Emperor’s Palace Casino Hotel and Convention Centre on Thursday, 13 June. Quoted in a Political Analysis report, the Nigerian Diaspora Commission (Nidcom) demanded full cooperation from the South African government “and expect nothing less.”

“We must know what happened. If it means getting a private investigator, we will; we should not be pushed to the edge. We have reached a tipping point,” Nidcom chairperson, Abike Dabiri-Erewa exclaimed.

Dirco sends warning to the highest order in Nigeria

Pandor noted that South African authorities are doing everything in their power to fast-track the investigation into the death of Ndubuisi-Chukwu. She stated that these outlandish statements do nothing but hurt the strong bilateral relations South Africa has shared with Nigeria for many years.

“We find these statements most unfortunate, as they don’t reflect the strong relations that exist between the people and the governments of South Africa and Nigeria…

“The acting High Commissioner to Nigeria, of South Africa, Mr Bobby Moroe, who is with us today, has had several meetings with the police an other senior government officials in Nigeria. We’ve also had contact from the highest level of the Nigerian government and have been assured that authorities in Nigeria are taking these calls for a protest campaign seriously,” Pandor added.

The minister called on South Africans in Nigeria to rest assured that they — as well as their property in Nigeria — will be protected.

“We believe no one should abuse this unfortunate tragedy to generate negative sentiments about South Africa and we express our condolences to Mrs Ndubuisi-Chukwu’s family, friends, and the people of Nigeria,” the minister said.