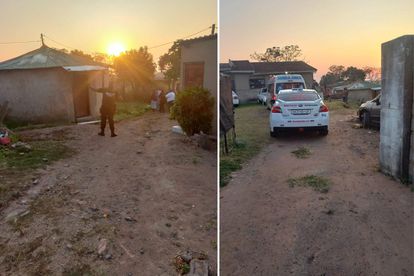 NAKED couple was brutally shot and KILLED in their bed in KZN Photos: RUSA

NAKED couple was brutally shot and KILLED in their bed in KZN Photos: RUSA

A naked couple was brutally shot and killed in their bed in KwaZulu-Natal.

THE BULLET-RIDDLED NAKED BODIES OF THE COUPLE WERE FOUND

The bullet-riddled bodies of the couple were discovered in their rented room in Cottonlands by neighbours.

The motive for the murder is still unknown.

BOTH WERE SHOT MULTIPLE TIMES

According to Reaction Unit SA (RUSA) spokesperson Prem Balram, neighbours discovered the couple several hours after hearing a volley of shots being fired.

“Residents contacted Reaction Unit South Africa (RUSA) at approximately 06:24 on Saturday after they made the discovery during a wellness check.

“Reaction Officers & RUSA paramedics were dispatched to the scene and on arrival found a large crowd that had gathered in the yard.

“Paramedics entered the room and located the couple lying naked in their bed.”

NEIGHBOURS MADE THE GRUESOME DISCOVERY

He said the entrance door to their rented room was forced open.

“Other tenants informed Reaction Officers that they heard multiple shots being fired in the building at approximately 02:30. They were afraid to immediately leave their rooms and waited several hours before conducting a wellness check on everyone on the property.”

The motive for the murders was not yet established.