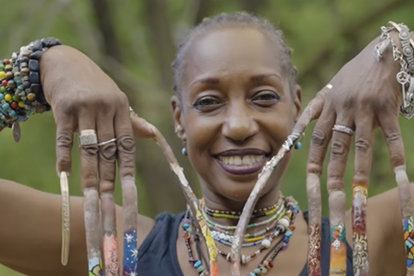 This woman loves her long nails. Images via Facebook: Hooked On the Look

This woman loves her long nails. Images via Facebook: Hooked On the Look

Over the years, many weird and wonderful things have popped up on our timelines and this woman’s super long nails are one of those things. 59-year-old Cordelia says that she has been growing her nails since the eighties and will never stop. Her nails have however drawn a lot of criticism her way from people across the world who find it somewhat disgusting.

She isn’t the first and she probably won’t be the last person in the world to grow her nails to an unnatural length. Cordelia from Virginia in the US has been growing her nails for thirty years and says that she will never stop.

According to a Hooked On the Look video, Cordelia first started growing her them so that she could “express herself.” This was a whopping 39 years ago. Her talons have since grown 12-inches and gets her all of the attention she has ever wanted:

“I’d have to say the best thing about having the super long nails is the attention.”

Netizens are not loving it

She has gained a lot of criticism from internet users who find it both impractical and disgusting. Many of them have asked how she manages to do her day-to-day task.

Others have however expressed that they don’t really mind her nails – especially if having them at that length makes them happy.

“You are yourself without any attributes. It’s simply impractical, it bends her finger bones. Just looks very unhealthy and painful.”

“Her fingers have become deformed because of those nails. They look painful. I’ve watched a few long nail stories. Each person’s fingers became deformed. I just don’t think it’s a good idea. But she is definitely a beautiful lady.”