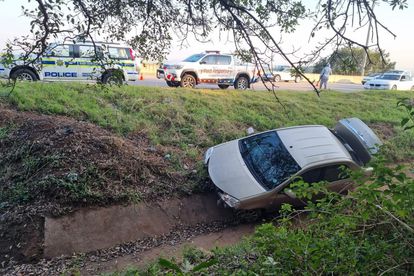 Five alleged armed robbers have been shot dead while three are critical following a robbery and high speed chase with the police in Tongaat, KwaZulu-Natal (KZN).

The scene is currently active on the N2 North bound, stretching from the Tongaat toll plaza, up until King Shaka airport off-ramp.

According to emergency service group, Medi Response, reports from the scenes suggest that criminals had committed an armed robbery in Empangeni and had fled the scene in two vehicles, on the N2 highway. The getaway vehicles were intercepted by a private security company and a chase and shootout ensued.

In the vicinity of Tongaat plaza, three suspects sustained fatal gunshot wounds whilst the second getaway vehicle managed to escape and continue down the highway.

In proximity to King Shaka International Airport, three more suspects, in the second getaway vehicle, sustained gunshot wounds during an exchange and two have died. One is in a critical condition andwas reportedly being treated by Medi Response paramedics.

The crime scene is reportedly still and traffic is affected. This is a developing story, The South African will provide more information when it becomes available.

In a separate incident, a man broke his legs when hit by a car as he was trying to flee from armed robbers on the R102 last week Friday.

According to Reaction Unit SA (RUSA) spokesperson Prem Balram, the 41-year-old man was seriously injured after he was run over while fleeing from armed robbers on the R102 in the vicinity of the Palmview intersection, also in KZN.

“Passing motorists contacted Reaction Unit South Africa (RUSA) at approximately 07:57 requesting assistance for a pedestrian lying on the side of the road. On arrival, it was established that two armed robbers approached the pedestrian.

“The man attempted to flee through morning traffic when a passing maroon Toyota Landcruiser struck him. Both his legs were broken in the accident.”