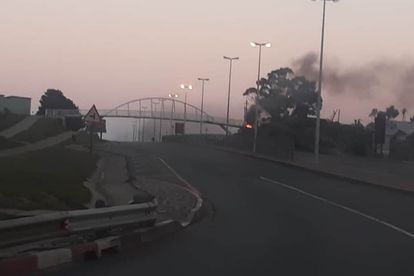 Late on Tuesday night, a violent protest erupted near the informal settlement of Qolweni in Plettenberg Bay. By Wednesday morning, the N2 highway remained closed due to burning debris.

While it’s unclear as to what sparked the protest action, previous disruptions in the area have emanated from housing disputes and inadequate service delivery. According to eyewitness reports, disgruntled community members from Qolweni informal settlement took to the streets in a show of frustration.

Burning tires and debris scattered roads in and around the settlement, with the N2 being specifically targeted. As a result, the Bitou Municipality resolved to close the section of highway between Shell Ultra City and KwaNokuthula. Law enforcement agencies are monitoring the situation and overseeing clean-up efforts. It’s understood that calm has been restored to the area.

In the wake of the disruptive protest action – which was quelled by public order police and crowd management units from the South African Police Services (SAPS) – traffic officials have diverted motorists away from the affected area. According to the municipality, traffic in both directions has been diverted via the Airport-Robberg road from the Knysna and through Plettenberg Bay town from the direction of Port Elizabeth.

Manfred van Rooyen, spokesperson for the municipality, confirmed the disruptions but added that no demands had yet been tabled by community members.

No arrests in connection with the protest action have yet been made.

Shortly after midday. the protesters returned to the streets with the intention of marching to KwaNokuthula, ostensibly, to gain support from the neighbouring settlement. These efforts were swiftly thwarted by law enforcement officers.

Van Rooyen reported that, through tense engagements with the protesters, key problem areas emerged and a list of grievances were eventually tabled. Part of the protester’s demands was that ward councillor, Xola Matyila, immediate step down from his position.

Matyila was subsequently removed from the area for his own protection.