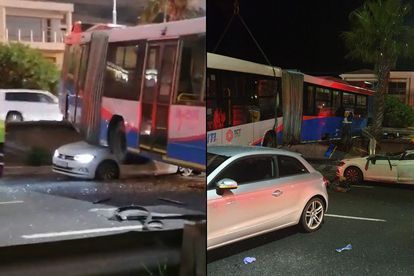 A car was crushed by a MyCiti bus on Thursday, 30 June. Photo: Screenshot from video / City of Cape Town

A car was crushed by a MyCiti bus on Thursday, 30 June. Photo: Screenshot from video / City of Cape Town

The MyCiti bus that was involved in the accident along Nelson Mandela Boulevard on Thursday evening was travelling towards the City when it crossed the road barrier and landed on top of a passenger vehicle, the City of Cape Town said on Friday

As previously reported, three injured patients were taken to the hospital from the accident scene on Thursday and no fatalities were reported.

In the latest update from the City, the Urban Mobility Directorate revealed that seven passengers were aboard the bus when the accident occurred at approximately 18:15 on Thursday.

The City said two private vehicles were involved in the accident – the one trapped beneath the bus and a vehicle that crashed into it.

“We can confirm that the MyCiTi bus driver was not injured but is currently receiving trauma counselling to deal with the shock.

“We are grateful that no fatalities have been reported to the City and await further updates about the driver of the vehicle who was trapped under the bus, and the MyCiTi passenger who sustained injuries last night,” said City of Cape Town MayCo Member for Urban Mobility, Rob Quintas.

The Urban Mobility Directorate awaits the vehicle operating company’s report on the accident before the “root cause” of the incident can be determined.

Quintas’ Directorate stressed that all MyCiti buses undergo a compulsory roadworthy test at an independent testing station every six months.