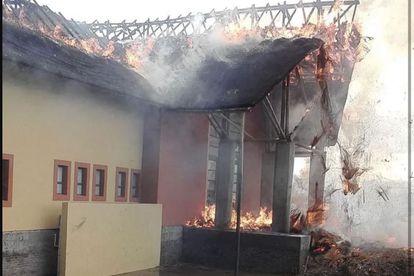 It seems the start of 2022 is all about fire. And that’s certainly not the start to the year that any of us wanted. First, it was Parliament, then several fires across the Western Cape. And now the Mvezo Welcome Centre has been left gutted. The centre was set to be a key point for tourists and South Africans visiting the birthplace of Nelson Mandela.

Heavy rains in parts of the Eastern Cape over the weekend came together with a big storm. That storm came with lightning. According to Mandla Mandela, the centre caught fire after it was struck by lightning on Saturday.

The thatched roof stood no chance. The Mandela family says no foul play is involved.

“This was an act of nature and no foul play or any other cause is suspected. It is regrettable that we have lost this infrastructure which was at an advanced stage of construction. R10 million was spent on the first phase and the lightning mast poles were not installed yet.”

The building was constructed after R17 million in funding was received from the National Lottery.

“We assure the local community and our development partner, the National Lottery, that no sabotage was involved and that the cause was beyond anyone’s control”, Mandela said on Instagram.

It is not yet clear whether construction at the Mvezo Welcome Centre will continue.

Fire on the mountain

It’s fire season one province over in the Western Cape.

Over 80 vegetation fires have been reported in the Cape Town metro going into the weekend. Firefighters have managed to contain a blaze on Signal Hill. That fire first broke out on Saturday morning.

According to Working on Fire, 6 teams of firefighters have been dispatched to help out with a blaze in the Highlands area of the province. Two helicopters are currently water bombing the fire.