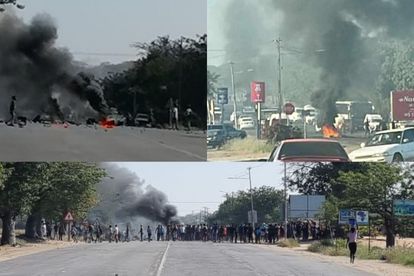 Roads have been blocked, businesses looted and now four arrested throughout the Musina unrest. Photos: Supplied

Roads have been blocked, businesses looted and now four arrested throughout the Musina unrest. Photos: Supplied

The unassuming town of Musina in Limpopo is under siege by outraged residents who have wrought chaos since Tuesday evening. The outrages stem from a demand that their rights to water are actualised.

Residents say the water supply was cut without warning at the beginning of the week by the Vhembe District Municipality. Attempts to meet with the municipality have failed much like efforts to reinstate a water supply.

“The arrests started around 22:00 on Thursday. The arrests have been for public violence, arson and malicious damage to property, following the violent protest action which erupted in this Musina since the beginning of this week,”

The suspects are expected to appear in the Musina Magistrate’s Court soon.

Since the onset of the unrest, violent protestors have rampaged Musina. The community has blocked and burned tyres on the roads and shops in the Nancefield location and Musina town were looted. They have also damaged a Police vehicle and torched a Municipal tractor and some Municipal buildings.

Ledwaba says members of the Public Order Police have since stabilised the situation and police deployments will remain in the area to monitor the situation.

Provincial Commissioner of Police in Limpopo Lieutenant General Thembi Hadebe has made a call for calm.

“I urge the public to raise their concerns peacefully and desist from resorting to violence. Blocking roads, looting businesses and damaging properties are serious offences and the police will not hesitate to act against the perpetrators,”

Police investigations are continuing with hopes of the imminent arrest of more Musina unrest suspects.