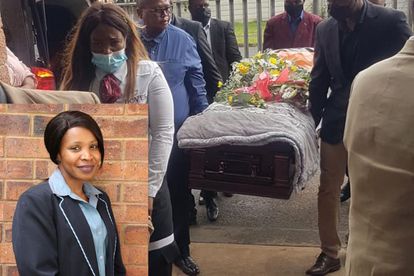 Samukelisiwe Penelope Nxumalo who was murdered outside the Rutanang Primary School in Geelhout was laid to rest. Photo: North West Department of Education

Samukelisiwe Penelope Nxumalo who was murdered outside the Rutanang Primary School in Geelhout was laid to rest. Photo: North West Department of Education

The North West teacher who was brutally murdered outside Rutanang Primary School in Geelhout Park last week was laid to rest in KwaZulu-Natal over the weekend.

However, police are still searching for the two men who committed this hideous crime.

Samukelisiwe Penelope Nxumalo was shot at close range by two unknown men in front of the school gate on Tuesday. She was inside her Fortuner when she was shot and the men left without taking anything, police said.

Most speakers at Nxumalo’s funeral spoke on how justice needs to be served for the teacher.

“This incident has extremely touched my heart. I have never seen a woman being so much violated and killed in this way. I am very much confident that justice shall be served for Penelope Nxumalo,”

She added that they know that those behind her death are now restless as the wheels of justice are coming behind them.

She conveyed her heartfelt condolences to the entire family and the Rutanang Primary school community.

MURDERED TEACHER WAS A PILLAR TO THE LEARNERS

Nxumalo was described as a loving teacher who the learners at the school could always depend on.

“She was a counsellor to our kids. She wiped away their tears and assured them that no matter how bad things were it will be okay,”

said one of the teachers at her funeral.

He said she was a friend to many and was dearly loved.

North West police spokesperson, Brigadier Sabata Mokgwabone has confirmed no arrests have been made in the murder case.

“Police are still investigating the case and no arrests have been made yet.”

Members of the community are urged to work together with the police to ensure that the suspects are brought to book.

Meanwhile, the police request anyone who may have information to contact Lieutenant Colonel Partson Chomela on 082 772 8124.