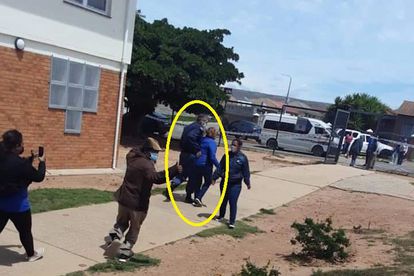 A bizarre altercation has played out at Fernwood Primary School in the Eastern Cape this afternoon – after DA stalwart Helen Zille was forcibly ejected from a voting station by police officers, for an as-yet-unspecified reason.

The Bethelsdorp facility is currently tallying up the local votes for the 2021 Municipal Elections, but onlookers were left horrified when they caught a glimpse of Zille being dragged away by a burly police officer.

Though we are still waiting for confirmation on a number of details, we do understand that Helen Zille has filed a formal complaint against the police, and she has opened a cause of assault against the hands-on cops.

@HeraldNMB that's @helenzille being dragged out of a voting station. What's going on here #helen pic.twitter.com/OPvGfDLMc0

WATCH: Helen Zille was just physically dragged out of a voting station near Port Elizabeth by Police. pic.twitter.com/ba5a6ZzxTR

Earlier in the day, Helen Zille had registered her disdain for the staff operating the voting station at Fernwood Primary, berating election officials for their ‘poor training’ and ‘frustrating manner’. The 70-year-old then escalated the matter.

“I’m partially happy with what I’ve seen, but some officers are very poorly trained. They don’t know what the difference between certain forms are, it’s very frustrating. I have escalated what I’ve seen today.”

This incident comes just hours after a Newzroom Afrika journalist was also on the receiving end of some heavy-handed treatment. Ziniko Mhlaba was arrested while live on-air, after he allegedly went into a voting booth without proper media accreditation. The reporter denies the allegations, and he has since been released from custody.

Tensions are usually high on Election Day, but this newfound overzealousness from SAPS seems to be taking things one step too far. Thankfully, Helen Zille was not injured or harmed following her brush with the law.