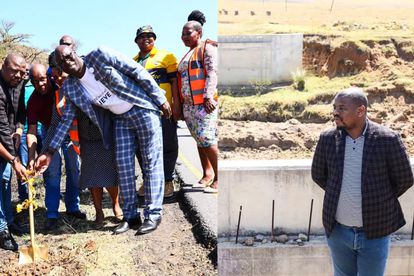 The KwaZulu-Natal MEC for Transport, Community Safety and Liaison, Sipho Hlomuka, launched the multi-million rand projects under uThukela District that will improve tourism and the district economy.

MEC Hlomuka led the contractor handing over for two major projects – R74 in Bergville and iNkunzi river bridge in Ladysmith.

According to the department, the two infrastructural projects will be reconstructed at a combined value of more than R27 million.

THE BIGGER PICTURE EXPLAINED FOR THESE PROJECTS

These two projects are set to improve the movement of people in the district and will help grow the economy by opening trade, tourism and movement of goods between provinces and local businesses.
R74 was damaged by floods which resulted in the Armco pipe being washed away. This caused failures on the road which forced the road to be reduced to one lane.

R74 in Bergville is strategic as it provides an alternative route to N3, linking KwaZulu-Natal and Free State.

ALSO READ: Over R77 million to be spent on flood-damaged road in KZN

He added that the Nkunzi river bridge links the community of eNkunzi to the main road D-2404 which is linking Ladysmith and Dundee. The bridge provides a link to many amenities such as schools. The bridge will provide safe crossing to community members.

Commenting during the handing over of these two projects, MEC Hlomuka, committed the department of transport in fixing all halted infrastructural in the province.

“These two projects are important to the people of uThukela District in different ways. R74 is significant for tourism and economic growth. Equally, Nkunzi vehicle bridge will provide a safe crossing for the local community. The investment of more than R27 million will go a long way towards the creation of jobs, mainly to young people and women. Emerging contractors will also benefit from these two projects. As the Department, we remain committed in prioritizing infrastructure delivery and we continue to roll out strategic infrastructure projects as part of rebuilding the province after the devastating floods,” said Hlomuka.