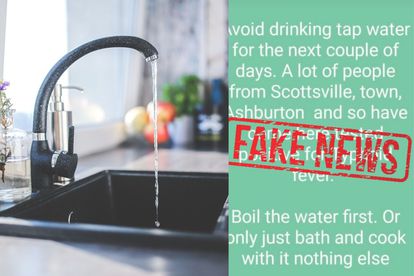 Msunduzi Municipality in the Capital of KwaZulu-Natal has assured residents that its water is safe to drink.

The municipality took to Facebook today, Friday 12 August to urge its citizens not to panic over a post circulating on social media suggesting its water was contaminated and could cause typhoid fever.

“The Municipality has noted with concern the fake news, purportedly issued by Medi-Clinic Hospital, that has resurfaced and circulating on social media in relation to water contamination,” the post read.

“An anonymous message is once again circulating on various social media platforms concerning fears that ‘typhoid’ fever may have compromised water quality. The Municipality assures residents that Msunduzi water is safe to drink.”

In addition, Msunduzi Municipality went out to verify this message.

Msunduzi says drinking water quality is based on the standards in accordance with SANA 241.

“Umgeni Water has confirmed that water is safe to drink without boiling or further disinfection. The Municipality appeals to consumers to ignore such messages and only heed those coming directly from the official sources of public information,” the municipality advised.

VOTED THE BEST DRINKING WATER A FEW YEARS BACK

In 2016, Msunduzi water was voted among the best most hygiene water in South Africa.

The Witness reported that the Department of Water and Sanitation announced the news that the Msunduzi Municipality’s water score of 97,97% by independent assessors was the best in South Africa.
The Blue Drop Status assessment was launched by the department in 2008, and looks not only at the quality of drinking water, but also at the entire water provision cycle.