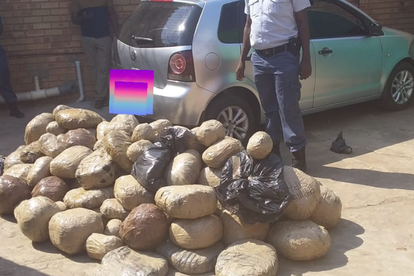 The police arrested the 44-year-old man before he was due for a court appearance on Thursday 16 September.

The arrest was applauded by the Mpumalanga Provincial Commissioner of the South African Police Service in Mpumalanga, Lieutenant General Semakaleng Manamela.

“The Provincial Commissioner of the South African Police Service in Mpumalanga, Lieutenant General Semakaleng Manamela has welcomed the arrest of a 44-year-old man who was nabbed in the afternoon of yesterday, Wednesday, 15 September 2021 at Mzinti near Tonga after being reportedly found in possession of dagga to the estimated street value of about R252 000-00,” Arrive Alive reported.

“The man is due to appear before the Nkomazi Magistrate’s Court today, Thursday, 16 September 2021.”

THE SUSPECT DROVE A POLO WITH 110 BAGS OF DAGGA

SAPS officers were monitoring the area when a questionable VW Polo appeared in view. The officers pulled the driver aside before a search uncovered 110 bags of compressed dagga with a weight of around 168 kg.

“It is reported that police at Tonga were busy patrolling around the area when they spotted a suspicious VW Polo. The members stopped the vehicle and upon searching, 110 bags of compressed dagga weighing about 168 kg were found inside,” the report added.

“The man was then arrested and the vehicle confiscated. The suspect is charged with dealing in dagga. Police believe that the man is from the Kingdom of Eswatini,” concluded the report.