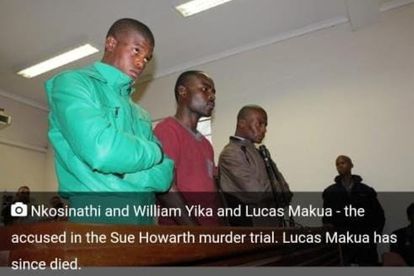 Two brothers in Mpumalanga have been sentenced to 20 years behind bars for killing an elderly woman and an additional 12 years for the attempted murder of her husband, the South African Police Service (SAPS) in the province has said.

Nkosinathi (28) and Themba Yika (38) and a third man, Lucas Makua, stormed a house in Dullstroom back in February 2017 and held an elderly couple hostage while robbing them of their belongings, including their mobile phones.

“During the hostage drama, the female victim was shot by the suspects and sustained some injuries whilst they tied the husband as well as severely assaulted him with a torch. The suspects are said to have then demanded pin codes for the victims’ bank cards,” said SAPS Mpumalanga spokesperson Brigadier Selvy Mohlala.

The trio then dragged the pensioners into their Nissan bakkie (owned by the couple). The husband was then shot by one of the men before being left on the side of the road with his wife.

“The victims were later assisted by a concerned citizen who found them and rushed them to hospital where the wife unfortunately succumbed.Police at Dullstroom were informed by the paramedics about the incident whereby a murder and robbery case was opened. The team of investigators began their investigation where they gathered some information and worked tirelessly with the purpose of finding the perpetrators”

Just days after that horrific incident, Mpumalanga police had a breakthrough in the case when the three suspects appeared in the Belfast Magistrate’s Court for a different case of stock theft. Police were stunned when they discovered the three men were in possession of a cell phone that was stolen during the robbery and murder.

They were immediately arrested the trio and charged them for possession of suspected stolen property.

“In the tour of the investigation, police managed to trace the stolen bakkie as well as the camera in Middelburg, all these items were also forcefully taken during the said robbery. The three were later linked to the robbery of the pensioners where the wife was sadly murdered whilst the husband was lucky to be alive after being shot and sustained some serious injuries,” Mohlala added.

During the course of the trial, one of the accused, Lucas Makua pleaded guilty to the charges and confessed to having carried out the robbery and murder before passing away in 2021.

“The state built their case against the two remaining accused persons and the court took into consideration the guilty plea by the deceased man. The evidence was overwhelmingl hence the two men were convicted on 06 March 2022 then sentenced by the Mpumalanga Division of the High Court which was sitting in Breyton on 30 June 2022,” Mohlala further said.