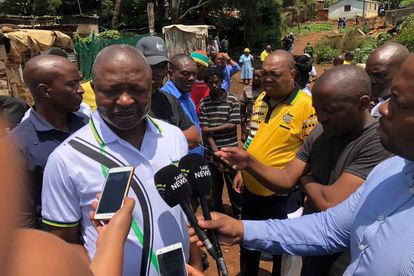 Deputy president of the African National Congress (ANC), David Mabuza and his team of campaigners were faced with a rude awakening when they paid the community of Mpophomeni, in Howick, Kwa-Zulu Natal, a visit on Wednesday.

The ruling party is hot on the trail of its #ThumaMina campaign that sees many of its leader pay door-to-door visits to mostly impoverished parts of the country.

The mission is clear: remind the marginalised people of South Africa about the horrors of apartheid and ensure that the only thing they remember at the polls is the face of Ramaphosa, the man who has vowed to take the country out of the slump its found itself in for most parts of the last two decades.

This time around, however, Mabuza and co. did not expect to be received with the scepticism they were faced with when they touched down in Mpophomeni draped in ANC regalia.

According to Eyewitness News, the ANC still enjoys a stronghold in the region as Howick falls under the Moses Mabhida region. However, since Nasrec, there have been divisions and an increase in in-fighting in the area and the scepticism in seeing Mabuza heightened frustrations.

Mabuza, addressing the residents, used the latter as a way of conceding that the ANC has not been meeting its mandates and promises because it has been too busy dealing with internal squabbles.

Naturally, the community ate his words and accepted that as a sufficient reason for the plight they face daily. Mabuza further went on to make another promise and vowed to return at the end of February to ascertain if there has been made on the complaints he received on his door-to-door visits.

“As I’ve promised, I will be back at the end of February. I want to see progress on our promises. Their [residents of Mpophomeni informal settlement] situation is pathetic… we must make a plan.” he stated.