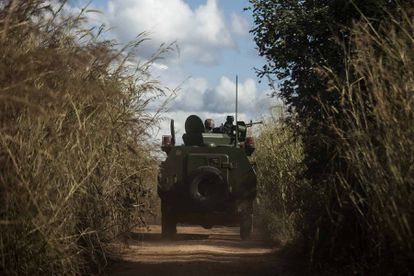 Mozambican regular army vehicles patrol the roads on the outskirts of Vanduzi village on May 26, 2016 in the Gorongosa area, Mozambique. Photo: AFP/JOHN WESSELS

Mozambican regular army vehicles patrol the roads on the outskirts of Vanduzi village on May 26, 2016 in the Gorongosa area, Mozambique. Photo: AFP/JOHN WESSELS

President Cyril Ramaphosa will attend an Extraordinary Double Troika Summit of Heads of State and Government of the Southern African Development Community (SADC) in Maputo to address the issue of terror attacks in Mozambique on Thursday.

President Ramaphosa’s acting spokesperson Tyrone Seale said in a statement released on Wednesday that the summit will deliberate on measures to address the recent terror attacks in Mozambique.

“SADC is deeply concerned about the continued terrorist attacks in Cabo Delgado, especially for the lives and welfare of the residents who continue to suffer from the atrocious, brutal and indiscriminate assaults,” Seale said.

The Summit has been convened President Mokgweetsi Masisi of the Republic of Botswana in his capacity as chair of the SADC Organ on Politics, Defence and Security Cooperation.

The summit is preceded by meetings of senior officials and ministers.

As the regional policy-making institution, SADC is managed on a Troika system that comprises the current SADC chairperson, the incoming chairperson and the immediate previous or outgoing

Ramaphosa announced last week that that the South African National Defence Force had sent troops to Mozambique to evacuate South Africans from the country which has been rocked by a spate of Islamic insurgency attacks in recent months.

South African, Adrian Nel, was killed in the Mozambique attack when he was among dozens of people who attempted to flee the town of Palma on 24 March when Islamic jihadists stormed the town, claiming to have taking control of it.