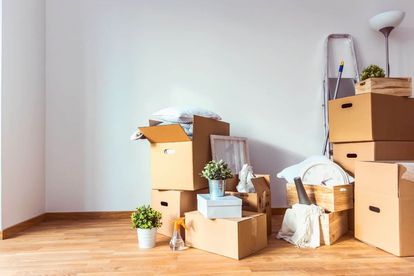 New lockdown regulations signed by Minister of Cooperative Governance and Traditional Affairs Nkosazana Dlamini-Zuma on 13 May state that citizens can move house but not until 7 June.

Those who need to move house across provincial, metropolitan, or district boundaries, need to do so during Alert Level 4.

Previously, the government in gazetted regulations stated that people could move to new homes on a once-off basis until 7 June. Not anymore.

This comes one day after President Cyril Ramaphosa addressed the nation saying that most of the country would hopefully be under Level 3 of lockdown by the end of May.

Let’s unpack shall we –excuse the pun — the government has now said we are allowed to move under Level 4 of lockdown.  The question is, how long will the country be under Level 4? How much time do citizens actually have to move?

The government initially said a once-off move could be done up until 7 June. That deadline is no longer in the regulations.

Ramaphosa said “most of us” would most likely be under Level 3 by the end of May. This, however, does not mean all of us. According to the president, certain areas of the country will be downgraded or upgraded depending on the spread of the pandemic.

Health Minister Zweli Mkhize on Thursday clarified and explained how it would be determined. He said that by looking at the average active cases per 100 000 people in each district, a decision will be made to either jump to the next phase of the lockdown or remain at the current level.

If Level 4 is the name of the game when it comes to moving then we aspiring movers don’t really have a timeline but that’s okay. It’s better than not being able to move at all.

The new regulations also allow victims of domestic violence to move to a different place. Businesses are also allowed to relocate to new premises but it must take place under Level 4.

On Wednesday evening Ramaphosa said there had been a disturbing increase in the number of gender-based violence incidents.

The president said the government developed an emergency pathway for survivors to ensure that the victims of GBV are assisted.

“One of the interventions we have made is to ensure lockdown regulations be structured in a manner that a woman can leave her home to report abuse without the fear of a fine, intimidation or further violence,” said Ramaphosa.

To facilitate moves, both household goods (in the case of moving house) and office furniture may now be transported.

Those who want to move must get a permit from the court or a police station. The permit must indicate which persons are part of the household. The permit also requires a signed declaration.

Those who want to move must travel with the relevant documents, including lease agreements — indicating the date of expiry of the old lease or the date of commencement of the new lease; proof of purchase of residence and occupation date, including transfer documents for a new property; a domestic violence order, or proof of change or new occupation of business premises.

Permits which have already been issued under the previous regulations remain valid.