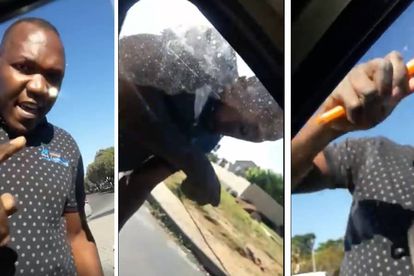 Itumeleng Kgoleng was taking his 7-year-old daughter to school when they became the victims of road rage and were assaulted by Steve Matavhulule, owner of Ambient Moon Air-Conditioning Services. Kgoleng recorded the incident, and his wife shared it on Facebook.

In the video, Matavhulule can be seen banging on the windows and pulling on the locked door handles, trying to get access to the vehicle. During the attack, Kgoleng’s terrified 7-year-old daughter can be heard crying in fear.

He then retrieves a wrench from his vehicle and proceeds to bang on the window. The video soon went viral, with 2,800 shares and nearly 13,000 shares in less than two days. Kgoleng’s wife, Florence, wrote in the caption:

“This barberic man attacked my husband and 7 YEAR OLD DAUGHTER this morning on their way to school, This man treatened their lives, with no care in the world that a child is inside the car. His not even moved by the fact that his been captured on video, he followed them to school after the video was taken.”

Florence added that Kgoleng had to enter the school premises for safety and pleaded with netizens to share the video as “this cannot go unpunished […] and may the long arm of the law deal with him on [16 days of activism.]

Kgoleng reported the matter to Honeydew SAPS, and Police spokesperson Captain Balan Muthan confirmed to The Citizen that Matavhulule was arrested Thursday afternoon and that a case of intimidation was opened. Both Kgoleng and Matavhulule spoke to Naledi Shange and Iavan Pijoos from TimesLIVE but their stories don’t line up. Kgoleng said:

“What happened was is that we were at the robot and there was a traffic jam. We were parallel, so I asked to move in front of him, but he refused. The next driver agreed. I teased him and poked out my tongue to show him I was cool and got a spot. The man stopped at the next robot and got out and came behind me. There were Metro cops, and they told him to get out of the way. So I just drove off because I was late… Only to find that he was following me. Two robots later he cuts me off and gets out.”

Kgoleng added that maybe sticking his tongue out at Matavhulule could have led to the incident, but according to Matavhulule, Kgoleng was driving recklessly and nearly caused an accident. He explained:

At the next robot, Matavhulule turned his window down to confront Kgoleng about his reckless driving. Kgoleng allegedly remarked that Matavhulule was driving a company vehicle and that no one would believe his version of the events if Kgoleng reported the incident. Matavhulule added:

“The traffic officers told me that we should make a statement, but the guy sped off. I thought he was running away, so I followed him to Northgate. I made a shortcut to block him. When he stopped, he took out a camera. I told him to take responsibility for what he did. I was just trying to scare him so that he can open the car so that he can tell me what he was doing. I just wanted him to say sorry and account for what he did, that’s all.”