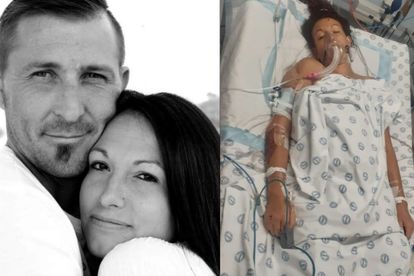 North West mother of two Charlene Drotsky is stranded in Cape Town with fiancé Corné Viljoen after a hit-and-run. She is now trying to raise funds to get home. Photos: Supplied

North West mother of two Charlene Drotsky is stranded in Cape Town with fiancé Corné Viljoen after a hit-and-run. She is now trying to raise funds to get home. Photos: Supplied

A mother of two who went out for the night with friends has been left with broken bones and a mountain of medical fees. She was being dropped off at home but the driver crushed her lower body before fleeing. She is now hospitalised in an unfamiliar province away from her children.

A NIGHT TO NEVER FORGET

Stay at home mother Charlene Drotsky from Klerksdorp, North West was involved in a hit and run accident on 2 April, while on holiday with her fiancé, Corné Viljoen in Malmesbury, Cape Town.

After spending a night out with friends, Charlene and her friends were offered a lift home by a stranger who they thought had saved the night but the mother of two could never have foreseen the pain that would follow.

She was the last person to be dropped off that fateful night. Upon arrival, Charlene attempted to exit the bakkie but the driver began to reverse, trapping her left leg under the front wheel.

While Charlene was screaming for the driver to stop, he instead tried to make his escape and drove over her waist with the front and back tyre of the vehicle, before leaving her on the road.

Corné came rushing to Charlene’s aid after hearing the commotion and phoned emergency services but the driver had disappeared.

Meanwhile, 13-year-old Cayden and nine-year-old Calden have not seen their mother since she left for the holiday.

Malmesbury police are investigating the hit-and-run.

After her ordeal, the mother of two sustained a broken scapula, pelvis and several broken ribs. She also suffered internal bleeding that led to her contracting septicemia and had bleeding on her lungs that needed to be drained.

Charlene’s sister, Marcelle, says due to the damage to Charlene’s pelvis, she has lost the function of her left leg and faces a long road to recovery.

“Charlene is a wonderful mother and a kind-hearted person who didn’t deserve to be discarded the way she was. This incident has devastated our family, especially Charlene’s two boys who weren’t convinced that she survived the ordeal. They don’t understand what has happened and cry daily for her to come home,”

As Charlene doesn’t have medical aid, and Corné has been unable to work while spending time at Charlene’s side in the hospital,

Marcelle launched a crowdfunding campaign on BackaBuddy to help the mother be transferred to a hospital in her hometown with her kids.

“We are hoping to raise R75 000 to transfer Charlene to a hospital in Klerksdorp, where she can get the best possible care, and be close to the boys that miss her dearly. Funds raised will also help cover Charlene’s medicine, walking aids, as well as the physical and emotional therapy she will need to recover,”

Since the launch of the campaign, over R8 500 has been raised to support the mother of two.

“The most difficult thing is feeling hopeless and helpless when someone you love is struggling or in pain. We hope that the public will help lighten the burden we are facing and help us seek justice for what has happened to Charlene,”