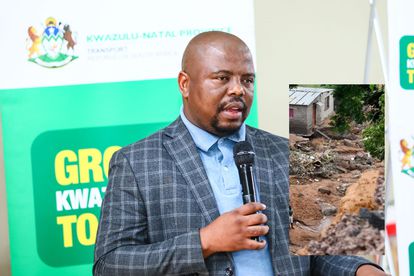 More than R27 million figured construction project has been unveiled and will be handed over to the contractor.

Tomorrow, Saturday, 10 September, The KwaZulu-Natal Department of Transport MEC Sipho Hlomuka will launch the R27 million construction project which is aimed at improving the roads in the northern parts of the province.

In a statement, the department said the KwaZulu-Natal Department of Transport continues to lead the infrastructure reconstruction and repair post the floods as part of improving connectivity and economic growth in the province.

MEC Hlomuka will preside at the contractor handing over for R74 in Bergville.

“This section was washed-away during the floods forcing road closure.”

This section is critical in connecting KwaZulu-Natal and the Free State. The contract value is R15 million.

On the same day, MEC Hlomuka will also proceed to launch the construction of Inkunzi vehicle river bridge. The bridge is essential in connecting the people of Alfred Duma in Ladysmith. This bridge is R12 million.

The proceedings will begin at 10 am in Bergv’ on the R74 and proceed to INkunzi Community Hall (Alfred Duma ward 24) from 1pm.

Meanwhile, on Tuesday, 6 September, Hlomuka, accompanied by iLembe District Mayor councillor Thobani Shandu, the leadership of the taxi industry, traditional leadership and local community, launched the R77 million road project which will benefit the community of KwaMaphumalo, north of the province.

ALSO READ: Over R77 million to be spent on flood-damaged road in KZN

This project was also a result of heavy rains that collapsed the road and caused a sinkhole which led to the road being officially closed. This forced motorists to take a detour via the KwaMaphumulo Central Business District which caused travel delays and road congestion.