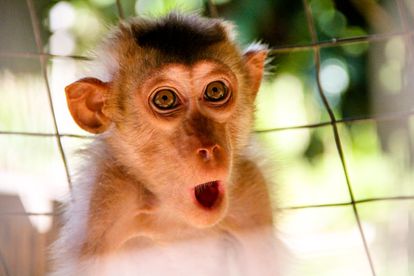 Monkeys mobbed an Indian health worker on 29 May 2020 and made off with coronavirus test blood samples, spreading fears that the stealing simians could spread COVID-19 in the local area.

Indian authorities often have to grapple with primates snatching food and even mobile phones, with Ani News reporting that a “troop of monkeys stole blood samples of some patients in Uttar Pradesh’s Meerut.”

After making off with the three samples earlier this week in Meerut, near the capital New Delhi, the monkeys scampered up nearby trees and one then tried to chew its plunder.

The sample boxes were later recovered and had not been damaged, Meerut Medical college superintendent Dheeraj Raj told AFP on Friday, after footage of the encounter went viral on social media.

“They were still intact and we don’t think there is any risk of contamination or spread,” Raj said.

NDTV reported that after snatching the samples and other medical items, one of the monkeys clambered up a nearby tree and began to gnaw on surgical gloves.

He added that the three people whose samples were stolen were retested for the virus. Coronavirus has been detected in animals, though there is no confirmation that the disease can then be passed on to humans.

According to a statement released by college principal Dr S K Garg, the monkeys only snatched blood sampled, not throat or tongue swabs from infected patients.

“These were blood samples that are taken from COVID-19 patients during routine treatment.

In many rural areas, farmers lose crops to monkey populations and have demanded local governments’ intervention to check their populations.

City authorities in New Delhi have famously used long-tailed langur monkeys to fight and scare away smaller primates from around the Indian Parliament.

India’s coronavirus death toll passed neighbouring China’s on Friday. At the time of publishing, India had 190 162 total cases after 8 335 new cases were reported within the span of a day. The country currently has 5 402 fatalities and 93 331 active cases; a total of 91 429 patients have recovered.

India, home to some of the world’s most packed cities and a creaking healthcare system, is emerging as a new hotspot with record jumps in new cases in recent days.