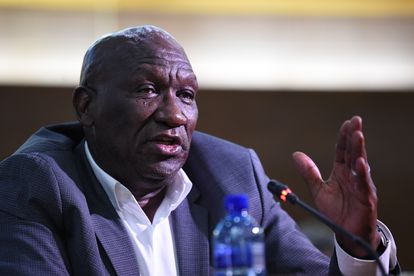 Police Minister Bheki Cele has said that when one of his officers came under fire from the Muslim community and the South African Human Rights Commission (SAHRC) in April for “blasphemous” reference to “Mohammed”, he was in fact referring to one of the people involved in the raid, rather than the prophet.

Officers stormed a mosque in Mpumalanga on 24 April and arrested 17 men who they said were in contravention of the Disaster Management Act’s lockdown regulations. Amid the chaotic raid, which was filmed and subsequently shared widely on social media, an officer can be heard making a remark asking whether “Mohammed is bigger than the President”.

‘Officer referred to someone in the room’

Answering questions at a parliamentary video call on Friday 8 May, Cele said that the officer, who’s conduct had been investigated, had now been cleared because he was simply referring to one of the people on the room, not the Prophet himself.

“He was referring to a person called Mohammed and not the Prophet Mohammed,” he said without a hint of irony.

Cele has already come under fire during the saga after retracting his apology to the Muslim community. He initially reserved regret over the officer’s actions, but then performed an about U-turn and declared that the police had every right to achieve their lockdown mandate as they had done in that instance.

The SAHRC said that the remarks made by the officer were unacceptable.

“The Commission strongly condemns the insensitive remarks made against the Islamic religion, especially at the time when Muslims in our country and all over the world were beginning the holy month of fasting as part of their religion,” the organisation said on 27 April.

The group were released on bail after their arrest, and have been bolstered in their outcry over their treatment by an appeal from the Muslim community to see lockdown regulations altered to allow for no more than four worshippers at a time be given access to mosques while adhering to social distancing protocols.