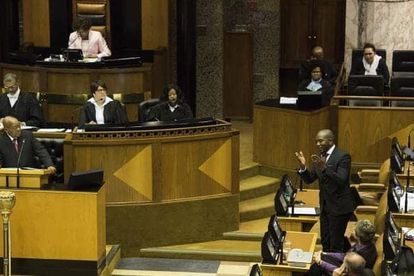 CAPE TOWN, SOUTH AFRICA  AUGUST 31, 2017: DA leader Mmusi Maimane during Jacob Zumas questioning in parliament on August 31, 2017 in Cape Town, South Africa. EFF leader Julius Malema dared President Jacob Zuma to take him to court for alleging that the president was corrupt and used his position to enrich his family. […]

CAPE TOWN, SOUTH AFRICA  AUGUST 31, 2017: DA leader Mmusi Maimane during Jacob Zumas questioning in parliament on August 31, 2017 in Cape Town, South Africa. EFF leader Julius Malema dared President Jacob Zuma to take him to court for alleging that the president was corrupt and used his position to enrich his family. […]

It’s been another fractious day in Parliament, as Jacob Zuma and Mmusi Maimane locked horns in political battle once more, resulting in a dramatic walk-out by the DA.

The DA leader appeared more emotionally charged than in many recent Parliamentary clashes with his adversary, and strenuously pushed Zuma to answer questions regarding state corruption and the cost of his legal fees to the tax payer.

Zuma gets sassy over SASSA

However, things got incredibly heated when Maimane asked questions regarding the Social Development Minister, Bathabile Dlamini. Implying that she was ‘incompetent’, the opposition leader made it clear that the SASSA issue isn’t something that could be merely blamed on apartheid.

An unflappable Zuma responded by saying that Mr Maimane was actively supporting apartheid. Needless to say, this crass statement somehow lowered the tone of this consistently embarrassing spectacle.

Things then erupted as Maimane pleaded with the Deputy Speaker to compel Zuma to provide an amount, with JZ’s opposite number yelling and banging the table in fury. Eventually, MM lead his party on a walkout – filling the void left by an absent EFF.

Speaking to IOL and ENCA after the madness ensued, Mr Maimane continued to rally against the President:

“He has captured Parliament and the speaker. He refused to answer the question. How do you proceed when he doesn’t answer the question? He’s undermining the constitution, and we can’t entertain him. He hasn’t paid any of the money [His legal fees at taxpayer expense], and therefore, this has become a sham. The whole Parliament becomes a sham.”

Zuma isn’t about South Africa. Nor is the ANC. They are all about themselves. Parliament doesn’t take instructions from the PM. He is here to be held accountable. Across all sectors, we will keep fighting for accountability.”

That’s all for this year, folks

The fiery session came to a close soon after the DA stormed out. Things will get a chance to cool down over the summer, as Zuma doesn’t return to Parly until his State of the Nation address in February.

It’s fair to say, neither of these party leaders will be on each other’s Christmas card list this year.