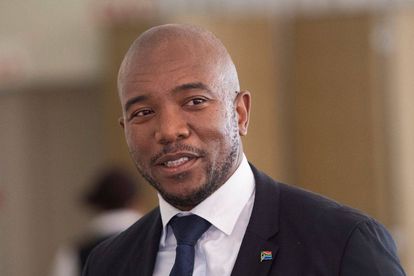 One SA Movement leader Mmusi Maimane has on Monday 2 November announced the launch of an ambitious Universal Basic Income (UBI) grant the will be piloted in early 2021. Maimane’s plan is to roll out a comprehensive grant to successful applicants that will supplement any additional income earned, as a means of combatting a growing wealth and income disparities.

He said that the RightfulShare grant would be funded through contributions by companies making over R50 million a year, by virtue of changes being implemented to the way in which the current Black Economic Empowerment (BEE) Scorecard operates.

A statement by the One SA Movement said that by changing the manner in which the current Black Economic Empowerment (BEE) Scorecard works, an unconditional, targeted grant will be paid directly into the hands of self-identified South Africans aged 18-59-years-old, “who have been economically excluded and who are struggling to make ends meet”.

The pilot scheme for the grant will consist of a R1200 payment made to 120 people on top of any income they may make, unconditionally, for 18 months. It is set to be rolled out in a yet to be announced rural town that is affected by widespread poverty and wealth inequality in 2021.

The pilot project will be privately funded by initial investors, in order to demonstrate to the South African public that the model is feasible and sustainable in the long term.

He said that should the pilot be successful, large companies with annual turnover of more than R50 million will pay 10% of their net after-tax profit into a “RightfulShare fund”, from which the proposed RightfulShare is paid.

“A business is 100% compliant when they have done this, and all other BEE requirements fall away. It meets the criteria of certainty, clarity, and simplicity – all of which investors like – and there is no place for corruption to take place,” said Maimane. “All indirect costs associated with the implementation of BEE and compliance monitoring fall away.”

RightfulShare is not means-tested. Instead, it is rolled out in terms of standard age categories, and paid through changing the BEE scorecard as opposed to being financed through worker pockets.

“It is more about creating an equal and just society as oppose to poverty alleviation alone.”

“The solution to socio-economic injustice should always have been the decentralisation of power – down to the individual level. We must deal with income depravation directly by ensuring more money in people’s pockets at grassroots level to boost local economies,” he said.

“The efficiency gains of such a model are far reaching. Not only do children have access to better nutrition due to higher household cashflow, but local economies grow from the ground up due to higher consumer spend.”

He said that amendments to the current structures governing the distribution of wealth are sorely needed, and said the huge growth in income and wealth disparities is “morally unacceptable, hinders economic growth, and fuels corruption”.

“Real wages have stagnated or fallen and the devastating impact of the coronavirus has exposed the dated and inept social safety net. Economic insecurity is the order of the day. Stressed and debt-ridden, most South Africans are just trying to survive.”