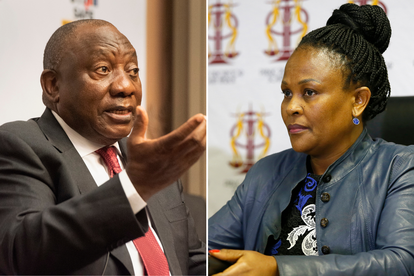 Lawyers for Public Protector, Advocate Busisiwe Mkhwebane have submitted a request for President Cyril Ramaphosa to be called before Parliament’s Section 194 Committee looking into her fitness to hold office.

Advocate Dali Mpofu, Mkhwebane’s legal counsel, confirmed that he wrote to the committee about their request.

“By now you would have received a letter from us on the 8th and that is a day before the public holiday, pertaining to the request that we are making to you to take the necessary steps to subpoena or summon President Cyril Ramaphosa, given the report we last gave, that he had declined the invitation to appear voluntarily,” he said on Wednesday, 10 August 2022.

WILL RAMAPHOSA TESTIFY IN MKHWEBANE INQUIRY?

The chairperson of Advocate Busisiwe Mkhwebane’s fitness inquiry Qubudile Dyantyi, is yet to formally respond to their request to have President Cyril Ramaphosa appear.

Mkhwebane’s lawyers had previously written to Ramaphosa, asking him to testify before the committee, but the Presidency spokesperson Vincent Magwenya said no such thing would be happening.

Mkhwebane maintains that Ramaphosa is conflicted because he features prominently in some of her investigations, including the probe into the robbery on his Phala Phala farm and the CR17 saga.