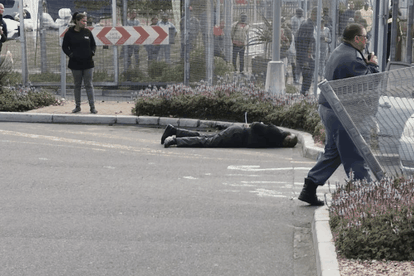 A gang of armed robbers botched a cash-in-transit (CIT) heist on Thursday morning, after attempting to steal money from a nearby McDonald’s restaurant. The opportunists were brought down by the authorities, and were cuffed and restrained in front of busy crowds at the Promenade Mall in Mitchell’s Plain.

The incident was reported just after 9:30. As the robbers attempted to make their getaway, gunfire was exchanged by the law enforcement and the criminals. The SAPS officers expertly subdued the cohort, who were unable to escape with any of the money. Three of them were arrested at the scene and forced to the ground.

Videos from the mall capture the crackling of gunfire, as panicked shoppers run for cover. The Mitchell’s Plain-based facility was heaving with customers at the time of the incident, but fortunately, no fatalities have been reported during the crime or the subsequent apprehension of these thugs.

After restraining the would-be CIT robbers, the authorities received back-up to the scene and medical crews were called in as a precaution. The scene has since been cleared, and the Promenade Mall remains open to visitors for the remainder of Thursday. We can chalk this one up as a job well done by our guys in blue.

Now, there’s an old saying that goes along perfectly with this scenario: “Play stupid games, win stupid prizes”. If you’re going to be foolish enough to endager people’s lives and break the law, prepare for the consequences: Like a long spell behind bars, and the public filming as you lie helplessly on the ground.

The police investigation has already got underway for the Mitchell’s Plain failed CIT heist. It comes just two days after another set of bandits attempted a cash-in-transit robbery, only to be gunned down by quick-thinking cops in Paarl. The Western Cape Police Department is on fire this week, and long may it continue.