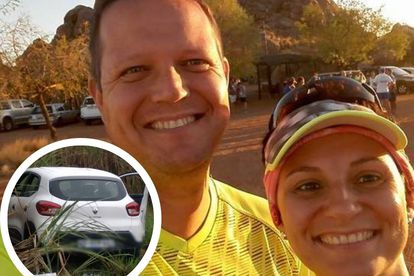 The husband of the murdered pastor, Liezel de Jager, who was reported missing amid the murder investigation has been found alive in a sugarcane field on Wednesday afternoon.

DE JAGER WAS FOUND IN HIS VEHICLE ON A SUGARCANE PLANTATION

Werner de Jager was found in a serious condition and was airlifted to a nearby hospital.

According to Emer-G-Med spokesperson Kyle van Reenen, paramedics were called to a sugarcane plantation in Ilovo South on Wednesday afternoon.

Van Reenen said this comes after the farmer discovered De Jager’s vehicle on his farm.

“Further investigation by security officers found a man seated in the vehicle in a serious condition.

“Emer-G-Med paramedics responded to the scene and stabilized him before he was airlifted with the assistance of the Netcare911 aeromedical helicopter to a nearby specialist facility for further care.”

He said the facts surrounding the man’s disappearance would be investigated by the South African Police Services.

She said a missing person case was opened on Sunday.

Mbele added that no one had been arrested yet.

This comes after the body of De Jager was found on Wednesday morning, 13 October 2021.

The 38-year-old De Jager was reportedly found by Werner just after 7 am with strangle marks around her neck.

According to reports, Werner was inside the house getting their two daughters, Ila and Lané.

“Upon arrival at the scene, police found the woman victim lying on the ground inside her yard with strangulation marks on her neck.

“None of her possessions were taken. A case of murder has been opened at Amanzimtoti SAPS for investigation.”

Last week family, congregants, and friends bid farewell to De Jager, who was clearly loved by many.

He said one of De Jager’s best qualities was her love for people and showing people how much God loved and lived through them.

An emotional Coetzee read a message from De Jager’s daughter Lane, who wrote:

“I hope you are safe there with God and that you don’t feel any pain. We miss you a lot, and we are heartsore. It’s ok to be heartsore. We will always remember you.”