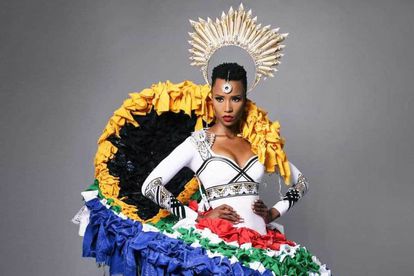 The National Costume competition is a favourite among pageant fans from around the world and Miss South Africa Zozibini Tunzi has unveiled her entry for the 2019 Miss Universe event.

Entitled Waves of Love the costume incorporates love letters from men to South African women as part of Zozibini’s support of the #HeForShe campaign, which seeks to activate men in the struggle against gender-based violence.

The creation is the brainchild of designer Lloyd Kandlin, who was responsible for the national costume worn by 2017 Miss Universe winner Demi-Leigh Nel-Pieters.

Zozibini takes the wave of love to Miss Universe

“Here she is! Waves of love! I’m proud to wear a wave of South African love with me on the Miss Universe Stage.

“Thank you to everyone who partook in my #HeforShe campaign and still continue to do so!”, said Zozibini of the outfit at the launch.

Zozibini will soon jet off to Atlanta, Georgia in the USA where she will compete on behalf of South Africa in the 68th Miss Universe competition. The pageant finale and crowning ceremony take place on Sunday 8 December but because of timezone differences South Africans will need to stay up late into Monday morning to support our girl on the global stage.

Last year’s runner-up Tamaryn Green sported a Blue Crane inspired look at the pageant where she narrowly missed out on making history for South Africa by snatching the crown for Mzansi after Demi-Leigh’s 2017 triumph. Miss Laos claimed the National Costume competition at the pageant in 2018 with an elaborate golden outfit.

This year Miss Phillipines 23-year-old Gazini Christiana Ganados will face the pressure of attempting to become the first nation to have two successive Miss Universe titles handed to them. Miss Universe 2018 Catriona Gray sets the bar very high for the young beauty but she is among the pageant favourites.

” The road to fulfilling dreams, punctuated as it often is with peril and pitfalls, is not always easy to navigate. There are rivers to ford and obstacles to surmount. It is no secret that anything that is worth having is earned through toil and deep thought. We at Miss South Africa believe that the ability to succeed in the face of adversity, while staying true to ideals and principles, gives birth to greatness. “