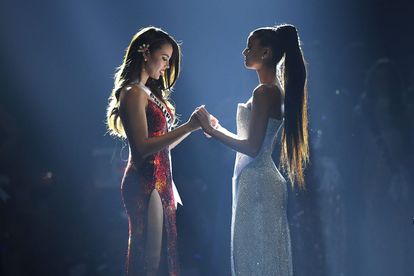 Top two finalists Catriona Gray of the Philippines (L) and Tamaryn Green of South Africa hold hands while waiting for the announcement of the winner during the 2018 Miss Universe Pageant in Bangkok on December 17, 2018. (Photo by Lillian SUWANRUMPHA / AFP)

Top two finalists Catriona Gray of the Philippines (L) and Tamaryn Green of South Africa hold hands while waiting for the announcement of the winner during the 2018 Miss Universe Pageant in Bangkok on December 17, 2018. (Photo by Lillian SUWANRUMPHA / AFP)

The Miss Universe organization are yet to reveal the host nation for the 2019 pageant finale but South Africa are among the nations rumoured to have been considered.

South Africa has not hosted the Miss Universe pageant before but has been home to the Miss World pageant seven times.

Sun City hosted the Miss World Pageant from 1992 until 1995 and staged the 2001 event as well, while Johannesburg staged the 2008 and 2009 finale’s at the Sandton and Gallagher Convention Centre’s respectively.

South Africa is a prime venue for global events due to the happy medium of our timezone, excellent weather and relatively low cost to produce television events.

Miss Universe has never been hosted on the African continent despite providing now fewer than five winners of the pageant. Two of those winners were from South Africa while Angola, Botswana and Namibia each sport one Miss Universe.

Last year the pageant was staged in Southeast Asia in the Thai capital of Bangkok.

In December of 2018 prominent Filipino businessman Chavit Singson, who financed Miss Universe 2016, stated that the 2019 edition of the pageant would be held in Seoul, South Korea, which hosted the event in 1980.

There has also been a suggestion that the Philippines could host the finale again having staged it in 2016.

A report in the Times of Israel suggests that the Miss Universe Organization have met with a pair of Israeli TV producers. Israel would prove to be a highly controversial choice of host nation and its selection would virtually guarantee a slew of boycotts.

The United States has hosted the event more than any other nation, having created the event, but organizers are not keen on staging the pageant in their backyard so to speak. The last pageant held in the US was as recent as 2017.

The pageant has been held on every continent except for Africa and there is little doubt that Mzansi would make an excellent host for the event.