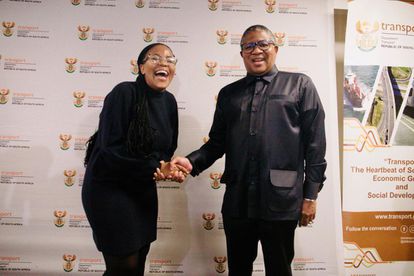 There is a new spokesperson in the Ministry of Transport following the appointment of Lwaphesheya Khoza by Minister Fikile Mbalula.

On 18 June, Mbalula welcomed Lwaphesheya to his multi-faceted department.

In a statement, Minister Mbalula revealed that Khoza has had experience within government communication with a background of being a media liaison specialist at a local government level.

“We wish Miss Khoza well on the new role and trust she will do well,” Mbalula said.

Lwaphesheya also known as Lwazi, took to Twitter to express her joy about the appointment.

“You’ve entrusted me with a very big task. I am truly humbled Minister,” she said.

Lwaphesheya has been receiving heaps of congratulatory messages from those who know her.

Yolanda Cuba said, “Congratulations Lwazi, we will miss your dedication and commitment at The MentorshipBR”.

Noxolo Madonsela said, “I am so proud of you. Good luck in your new role as Ministry of Transport Spokesperson. You’re going to kill it”.

Sarah Luvx – “This is such a big deal man. Absolutely great news. No one takes seriously what they do like Lwazi, whatever it may be”.