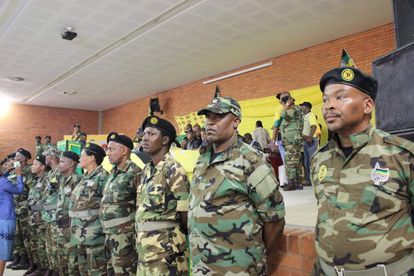 The military veterans who were arrested last week in connection with the hostage incident involving three government Ministers will appear at the Kgosi Mampuru II Correctional Facility Court on Monday, SABC News reported.

The 56 veterans are facing charges related to the Protection of Constitutional Democracy Against Terrorist and Related Activities Act.

Last week, the veterans allegedly blocked the entrance of the St George’s Hotel outside Pretoria after Defence Minister Thandi Modise, Minister in the Presidency Mondli Gungubele and Deputy Defense Minister Thabang Makwetla were taken hostage by the military veterans.

The Police Special Task Force was called in to intervene and arrested the MK veterans.

It is understood the former military soldiers are said to have demanded to see President Cyril Ramaphosa and his Deputy David Mabuza and also wanted government to give them R4 million each for their role in liberating South Africa.

They also accused Modise of not addressing their grievances which includes, among others, better care and payment of reparations after they previously forced their way into Luthuli House in Johannesburg.

The spokesperson for the military veterans, Lwazi Mzobe denied that they were holding the ministers hostage but social media pictures and videos that were leaked to the media showed the doors were indeed being blocked.

The military veterans have maintained that the 56 accused did nothing wrong, except demand accountability for the mismanagement of the Military Veterans Department and disputes over unfulfilled promises by government.

Deputy President David Mabuza has urged members of the Military Veterans to be patient, saying their plight will be addressed. Mabuza, who was speaking on the sidelines of the African National Congress (ANC) election campaign trail in Mamelodi outside Pretoria on Sunday, said that government was working tirelessly around the clock to improve the living conditions of these ex-soldiers.