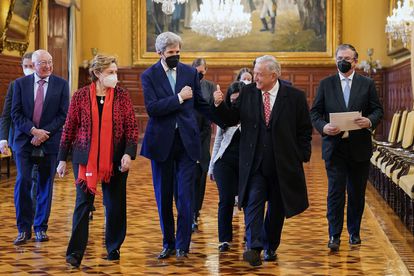 “The pause is: we’re going to give ourselves time to respect each other and not be seen as a land of conquest,” Lopez Obrador said at his daily news conference.

“We do want to have good relations with all governments… but we don’t want them to rob us,” he said.

Although the relationship with Spain “is not good now,” Mexico has no plan to break off diplomatic ties or recall its ambassador, Lopez Obrador said.

He again hit out at Spanish firms such as Repsol and Iberdrola, who have investments in Mexico’s energy industry.

Lopez Obrador accuses the companies of paying bribes in the past in exchange for contracts, with the complicity of Mexican and Spanish governments.

“It was a conspiracy at the top,” he said. “They looted us.”

The comments appeared to catch Spain off guard.

“The Spanish government has not taken any action that could justify a statement of this type,” Foreign Minister Jose Manuel Albares said, noting the importance of the two countries’ ties.

“Far from a pause, what we’re talking about is an increase in our business relations,” he said in comments released by his office.

Lopez Obrador’s remarks come at a time when foreign investors are concerned about his planned energy reforms.

Critics say the moves unfairly favor state-run firms dependent on fossil fuels over private electricity producers such as Iberdrola who have invested in renewable energy.

Relations between Mexico and Spain have been strained since Lopez Obrador took office in 2018.

Madrid has rejected his demand for an apology for the events of the conquest.