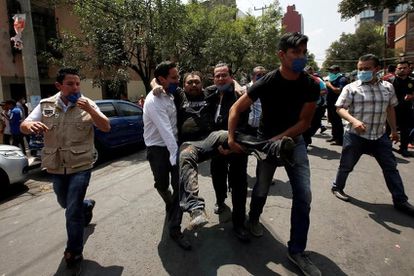 Dozens of buildings collapsed in a 7.1 magnitude earthquake that hit Mexico on Tuesday, killing at least 226 people around the country.  This is two weeks after another powerful quake killed at least 98 people in the south coast of Mexico.

The earthquake hit exactly on the day which marked the anniversary of a temblor that killed thousands in 1985.

Millions fled into the streets looking for safety and were also  concerned about the safety of their loved ones.

Rescue missions ensued in Mexico City, which inhabit a population of about 20 million people.  The earthquake is believed to have collapse about 44 buildings in the capital city.

The city reported a death toll of 49 by late Tuesday, according to civil defense chief Luis Felipe Puente. The highest toll, he said, was in Morelos State where 55 people were killed.

Thirteen people were reported dead in the neighboring states of Mexico and Guerrero. Thirty-two deaths had been confirmed in the state of Puebla where the U.S. Geological Survey located the quake’s epicenter.

As many as 4.6 million homes, businesses and other facilities had lost electricity, according to national power company Comisión Federal de Electricidad. Most of them were in the greater Mexico City area and in the states of Guerrero, Morelos, Puebla, Oaxaca, and Tlaxcala.

Rescue workers along with some civilians put in a desperate shift trying to clear out the rubble and rescue survivors. The search carries on throughout the night.