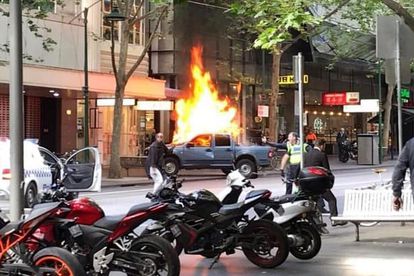 Australian police on Friday said a deadly knife attack in Melbourne was an act of terror, revealing that the deceased suspect was originally from Somalia and was known to intelligence agencies.

“We are now treating this as a terrorism event,” said Victoria Police Chief Commissioner Graham Ashton, adding that the suspect is “someone that is known to us” and had travelled to central Melbourne in a 4×4 packed with gas bottles.

Watch: Terrorist attack in Melbourne (video via The Sun)

Ashton said the attacker — who was shot by police and later died in custody — was known by the authorities because of family connections and had been in Australia for decades.

The counter-terrorism command has taken a lead role in the investigation.

One person was killed in the attack and two others were injured.

Police officers who apprehended the suspect are being treated for cuts and scrapes and are not thought to be in a serious condition.

Ashton said the authorities do not see any ongoing threat related to the attack.