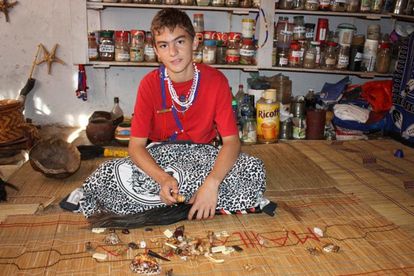 Kyle Todd is a 12-year-old traditional healer from Pretoria, the youngest white sangoma to be initiated into the practice of traditional medicine.

A few years ago Kyle began having premonitory dreams, which at first he and his parents thought were nightmares.

“A few weeks before Mandela died, I had a vision he was gonna die and people (said) it was a dream, that I am watching TV and getting nightmares… until the dreams … started becoming true,” he told AFP.

An old man and a young black sangoma would come to him in his dreams and teach him about the bones and medicines.

He woke up one day and asked his parents to drive him to the east of Pretoria. Once in Mamelodi, Kyle directed his parents to the house of the young sangoma who would later become his teacher.

Kyle completed his training in October 2014 and is now known as Frank Marshall.

Since qualifying, Kyle has been in demand. His teacher, Solly Mathebula told AFP: “I have got people from overseas now phoning (for appointments with Kyle), I have calls from all over South Africa.”

But Kyle has not had the same reception in his predominantly white neighbourhood. He gets teased at school and has lots a number of friends who fear he may cast a spell on them.

“I treat mostly black people, (because) white people, most of them don’t believe in this. So they don’t come,” Kyle said.

Kyle Todd, 12, at his initiation ceremony as a Sangoma, traditional healer, in Pretoria @AFPphoto @SafodienMujahid pic.twitter.com/vuz9cuIiGc

His parents, who support his calling, would like him to finish school and pursue a career in pharmacy or herbal science. He can then perhaps combine traditional medicine and science, his father said.

Of South Africa’s 69,000 registered sangomas, a very small number are white. Of the registered white sangomas, even fewer are as young as Kyle.