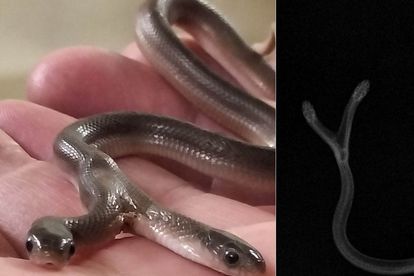 The two-headed snake found by Nick Evans is now on display at the Dangerous Creatures Exhibit at uShaka Marine World in Durban. Photo: Saambr / Facebook

The two-headed snake found by Nick Evans is now on display at the Dangerous Creatures Exhibit at uShaka Marine World in Durban. Photo: Saambr / Facebook

The two-headed southern brown egg-eating snake that was rescued by Nick Evans has found a new home. The 30cm serpent, named Jean-Claude, is now on display at the Dangerous Creatures Exhibit at uShaka Marine World in Durban.

Taking to Facebook, the South African Association for Marine Biological Research (SAAMBR) said Jean-Claude was given the name by herpetologists (scientists who study amphibians and reptiles).

Going into detail about the two-headed snake, SAAMBR said the phenomenon is known as bicephaly or dicephaly. It tends to happen when twin embryos do not completely separate. In humans, this is called co-joined twins.

How will Jean-Claude eat, when the time comes?

Jean-Claude has not yet been offered any food since being relocated. SAAMBR says this is because snakes such as this generally do not eat over winter. Adding that the southern brown egg-eaters typically eat three or four times every year!

When it is time for the two-headed wonder to eat, both Jean and Claude will be offered finch eggs.

“The radiograph images show clearly that the two spines are fusing. It would then be safe to assume that the two heads share most of the organs, such as the stomach and lungs. The left neck/head is 33mm long, and the right neck/head is 37mm long. The radiographs show the lungs clearly, but it is also obvious that the spinal cord is still very soft and cartilaginous, which is normal for a juvenile. No clear pathology is evident,”

Previously, it was reported that KwaZulu-Natal-based snake rescuer, Nick Evans rescued a two-headed snake in Ndwedwe. Evans said the two-headed snake is a Southern Brown egg eater which is common and harmless.

Evans said two-headed serpents have hatched in captivity and in the wild, but it’s very rare, it is a deformity. The snake was spotted by a man in his yard in Ndwedwe. The snake rescuer also added that it was such a strange sight, seeing this deformed snake.

Evans said the snake is in professional care now and there is no point in releasing it. Southern Browns generally don’t live long, reportedly. Read the full story here.